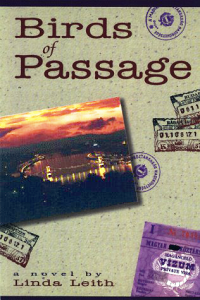 “Hungary 1990 – with dissident lives redundant after the defeat of Communism, market prices making beggars of the population and foreign feminism knocking rudely at the door – is the setting for this excellent first novel. Birds of Passage explores the tenuous relationship between a Canadian couple and their Hungarian neighbours. Linda Leith is perceptive and never sentimental about the role Hungary plays in the lives of the Canadians, Alice and Daniel.

“Across the street from them, the playwright, Gabor, a romantic, who has mostly escaped reality by living the cloak-and-dagger existence of an underground political activist, cannot settle down to domestic responsibility; his apartment is full of sparrows trapped by the closed windows.

“Leith is good on the claustrophobic, old-fashioned feel of Central Europe, with its male heroes, its sacred places and works of art which artificially perpetuate a culture shut off from the international mainstream. Hungarian men in particular are so well adapted to the cage that when released they can barely survive. Alice, who has a strong character and appalling clothes sense, is impressive. Leith has that cool, precise way with the passions that makes one think of Alison Lurie.”

“Leith handles emotional crisis adroitly, without being clichéd. Her prose style is observant, quick and spare.”

“Because Birds of Passage is a very sophisticated book, the title cuts many ways. The various birds that inhabit apartments, tunnels, mines, and nests enrich the story without intruding on it: suggestions of freedom and confinement, of beauty and fragility, rise naturally into the narrative. Moreover, because Gabor is a writer, Leith is able to comment playfully on her own creation. The novel’s ending seemed a touch contrived, but in a book of such varied delights this is a very small quibble. Leith has the gifts of a natural storyteller.”

“When I write stories I am like someone who is in her own country, walking along streets that she has known since she was a child, between walls and trees that are hers.”