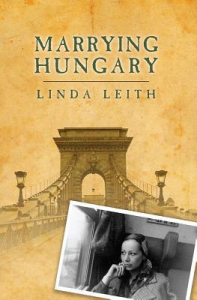 Marrying Hungary is the moving story of the daughter of Irish Communist parents who marries a Hungarian refugee. It is a glimpse into a life spent among foreigners, a tale of identity and eventual independence. And it reveals what few memoirs reveal: what brings a couple together, what marriage means to an ambitious and accomplished woman, and why sometimes even a good marriage eventually fails.

“Who marries Hungary? That question, perhaps the central one informing each of the five parts of this astonishingly gentle and remarkably clear-eyed memoir, involves, most keenly, the way in which a marriage works until both partners travel routes so foreign to one another that they cannot find the single one that will eventually bring them together again.”

— Judith Fitzgerald, The Globe and Mail

“It soon became apparent that Andy was from a different world, one that she later experienced first-hand during the two years they spent in Budapest in the early ’90s. Leith struggled valiantly to fit in, but experienced much frustration in her efforts. Andy’s desire to remain in Hungary ultimately ended their marriage.”

“Writing is a wrenching process, of a difficulty that cannot be imagined by anyone who has never seen a book through to publication. I would take this a step further. For me, it is not merely difficult to write; it is impossible to write. It has always been impossible for me to write. I do it anyway, and the very difficulty of writing is always my subject. I wrote myself out of the catastrophe of divorce.”