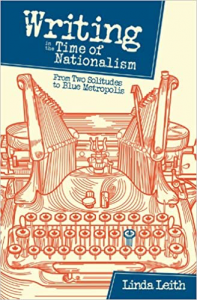 Writing in the
Time of Nationalism

Writing in the Time of Nationalism goes back in time to the days when Hugh MacLennan’s Two Solitudes was an international success, and when Mavis Gallant, Brian Moore, and Mordecai Richler were starting out in Montreal in the 1940s and 1950s.

This cultural history traces the effects of Quebec nationalism along with an upsurge in Canadian cultural nationalism in later decades, drawing on interviews the author conducted with dozens of writers in the 1980s and her own experience of the ensuing literary activism. This culminated in the creation of the Blue Metropolis International Literary Festival, the creation of Quebec Writers’ Federation, and international success for emerging writers from Yann Martel and Rawi Hage to Kathleen Winter, Louise Penny, Anne Carson, and Heather O’Neill.

“Written in clear, exhilarating prose, this is a very fine book. Clearly, this is Leith’s subject, and she tackles it with zest.”

— Marianne Ackerman, The Globe and Mail

“The two solitudes offer a mythic background foil to the David-against-two-Goliaths story that Leith wants to tell — and Leith deserves this emblem. For once again, when no-one else dared, she has launched the discussion of Anglo-Quebec literature and a debate that will take us long into the future.”

“Leith’s narrative… alternates between personal (but never very personal) observations and more generic accounts of the political events and changes that were going on around her. It is a sound procedure, and readers will learn much about the social and political history of post-war Quebec by reading this book.”

“I quote my favourite sentence from Linda Leith’s important book, Writing in the Time of Nationalism: From Two Solitudes to Blue Metropolis: “It’s so easy to turn everything that has to do with language into a joke. So easy and so risky, except at carnival time, when everything is permitted, except for what is not permitted, even at carnival time.” There in summation is the drama of sensitivities, contradictions, paradoxes, linguistic ironies and self-censorship in a dynamic city.”

“Being good is just not good enough. In the cutthroat world of literary reputations, you need a lot more than that. You need to be irresistible.”

— Linda Leith, Writing in the Time of Nationalism